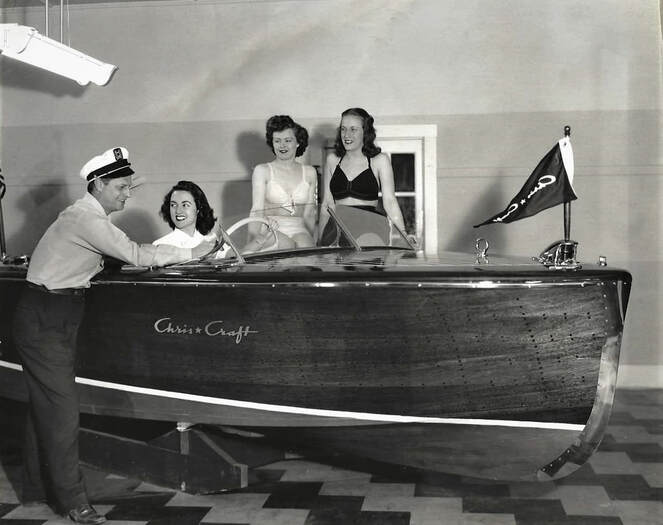 Mike's grandfather Jack Green
Maritime Classics officially began in 1997 in Portland, Oregon as Mike Green branched out from his apprenticeship with renowned shipwrights Dave Jerome and Al Thompson. Read more about Mike's family, experience and early years here. Although Maritime Classics specializes in Chris Craft boats, we have researched, restored, and repaired many kinds of wooden boats including; Gar Wood, Hacker, and Century. Since 1997, we have been documenting and compiling research to reference throughout our restoration process. We are proud to have access to some of the largest collections of information, photos and catalogs regarding historic wooden boats that we then utilize to restore vessels to their factory-original condition.

Early on Mike primarily worked remotely, traveling to a variety of jobs and working on many large wooden cruisers around the Portland area. This gave the business the opportunity to work on some amazing vessels such as a 70’ WWII Patrol Torpedo Boat (PT658) and two Huckins, one 56’ and one 65’. Following this, Maritime Classics was given the opportunity to restore the first of many classic runabouts. This boat was a 1957 18' Chris Craft Holiday that was refinished and earned Maritime Classics their very first award. In 2001, Maritime Classics received what felt like an offer of a lifetime. Mike received a call from a Hollywood producer working on the film Master and Commander, looking for someone to restore a 1913 16’ Russian Yawl. Mike was thrilled at the offer and is proud to have had the opportunity to work on such a unique project. A few years later, Maritime Classics opened their first official building and hired their first employee. Word started to get out about the work being done and the project offers became more and more frequent.

In 2006, Maritime Classics became a private restorer for an antique boat collector living just outside Portland, Oregon. The collector had five incredible boats, with four out of the five in need of full restorations. These projects lasted about five and a half years. This collection would be what earned Maritime Classics some of the most prestigious awards in the industry. In 2008, the business, along with Mike's family moved to Traverse City, Michigan in search of new opportunities. The Greens purposefully moved into a home with a spacious garage that acted as Maritime Classics's headquarters for several years. Mike slowly had to hire more and more help to keep up with demand and it started to get crowded in the garage. In 2014, Maritime Classics made its final move to a shop just a few miles from the Greens' house. The building now holds Mike, his 4 employees and 6-8 standard size boats - a huge improvement!

Maritime Classics has won well over 100 awards with boats they have restored including; Best Chris Craft, Best Engine, Best in Show, People’s Choice, and many other awards around the country at both local boat shows and ACBS International Shows. In 2013, Mike was named Professional Boat Restorer of the Year at the prestigious Lake Tahoe Concourse d’Elegance for his work on a pair of 1929 28' Chris Crafts Triples, one of which was a very rare Chris Craft Limousine that scored 98 out of 100 points by the judges. Maritime Classics is a two-time winner of the esteemed ACBS International Boat of the Year award and nine-time Lake Tahoe Concourse d'Elegance award winner.

What sets Maritime Classics apart is the vast historical knowledge and experience that Mike Green holds after over 20+ years in this profession. Not only did he grow up surrounded by wooden boat lovers and experts, but he has now carried that passion throughout his entire life. The accuracy of the information that Mike has learned over the years has led to multiple invitations to judge Antique and Classic Boat shows around the country and the world. Here at Maritime Classics, we are forever grateful for his dedication, passion and promise to continuously preserve and share this history for future generations.